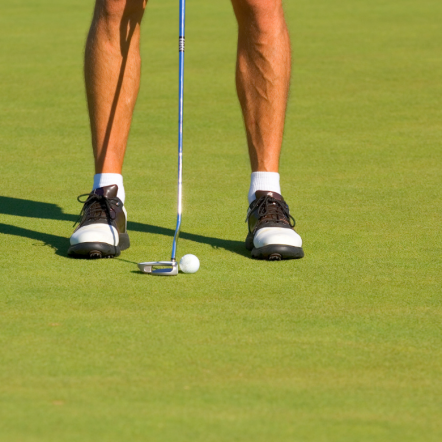 How To Putt A Golf Ball

The game of golf has many different aspects and arguably one of the most important is putting. 300-yard drives and towering iron shots mean nothing if you aren’t able to hole any putts.

More often than not golfers are more focused on their long games than they are on their putting. When you watch the pros play you realize very quickly that putting is what wins tournaments at the end of the day.

Below we are going to take a closer look at the basics of a good putting stroke and we are also going to explore some drills that you can do to improve your putting.

The grip is the only connection that you have with the golf club hence why it is so important to find a putting grip that works for you. Your grip has a direct impact on both the line and the speed of your putts and if your putting grip is slightly off making putts will be very difficult.

Your putting grip and normal grip with your irons and woods will differ. For some players this difference is small but for others, it is a massive difference. A claw putting grip definitely won’t work with any other club. Putter grips differ in terms of shapes and sizes from normal grips which are mainly why players are forced to grip their putter differently.

When it comes to your putting grip there is no right or wrong way to grip it, all that matters is that you feel comfortable and that you have control over the putter head. For some players, a traditional grip will work perfectly fine and other players might be better off with a more unconventional grip.

Comfort and control are vital, another important aspect to consider when working on your putting is grip pressure. Good grip pressure requires balance, you need to hold on tight enough to ensure that you have control over the putter face at impact, but you don’t want to grip it too tight because that will cause tension in your stroke and that will translate into rhythm issues.

To learn more about different putter grips including the claw and left-hand low grips watch this video.

A good setup is very important for both putting, chipping, and full swings. Putting stances vary and golfers, in general, aren’t scared to try different grips and stances if it means that they will make more putts as a result. Some of the best putters tend to have fairly simple, traditional setups. A simple setup will normally look something like this:

Good alignment seems obvious but it is a basic fundamental that even the best in the world often struggle with. Alignment in putting consists of three aspects namely body alignment, clubface alignment, and alignment of the golf ball.

Step one in the alignment process is to pick a target and to line your golf ball up using the line on your golf ball. Not all golfers use the lines on their golf balls but if you struggle with alignment it is a great way to make that part of the game easier.

With your alignment in place, all that’s left is to put a good stroke on the putt.

It is called a putting stroke and not a putting hit with good reason, start your stroke with your shoulders, and from there on out allowing the weight and the momentum of your shoulder-turn to stroke the ball. A good shoulder turn will do wonders for your consistency and speed control and your putting as a whole.

The impact zone is that 3 – 4 inches before and after the ball, if the putter head moves through that area square to you target what happens during the rest of your putting stroke is irrelevant.

I sound like a broken record but I can’t highlight this enough, when we putt the golf ball we stroke it and we don’t hit it. If you are struggling to stroke the golf ball then more often than not your wrists are too active. The wrists and their ability to bend and flex, are one of the main culprits that force you to hit the ball instead of stroking it.

Beginners and professionals alike all tend to follow the putter head and golf ball with the eyes and heads. This movement of your eyes and head changes the level of your body during the stroke which leads to inconsistent strikes and inconsistent putts.

Quiet eyes is a very basic fundamental that will benefit your putting greatly if you can do it consistently when putting. If keeping your head and eyes quiet during your putting stroke is something that you struggle with watch this video.

The train tracks drill is one of the most popular golf putting drills and with good reason. The key to good putting is to have a putting stroke that goes straight back and straight through in the impact zone, with longer putts and longer strokes the putter will follow the arc of your stroke but that 3 inches before and after the ball is vital.

A square putter face through impact will ensure consistency in both strike and directions and ultimately it will lead to more putts holed.

For the train tracks putting drill, take two alignment sticks, or golf clubs, and align them in the shape of train tracks. This drill can be done on the practice green or you can also do it at home on your carpet or home putting mat. Set the tracks up about 6 feet away from a target, the target can be a hole or a tee, a plastic cup is a great substitute for a hole if you are practicing at home. Make sure that the width of the tracks is slightly wider than your putter head, but don’t give yourself too much wiggle room either.

Do this easy drill as often as possible and see how your putting transforms.

When it comes to putting speed is key. Golfers tend to blame their putting woes on missing short putts or 3 putting but more often than not speed control is to blame.

The following drill is a great drill for improving your speed control on both long and short putts. Take a club and lay it flat on the ground about 2 – 3 feet behind the hole. On the other side of the hole opposite to where the club is placed, stick a tee into the green at the following distances away from the hole: 6 feet, 12 feet, 18 feet, 24 feet, and 30 feet. Take 3 golf balls and start at the tee that is 12 feet away from the hole, putt all 3 balls to the hole with the aim of holing the putt. If your putt misses it needs to end up between the hole and the club on the ground. Once this goal is achieved with all 3 putts move on to the next tee and repeat this process.

This is a great drill that will improve your speed control. If it becomes too easy, increase the difficulty of the drill by doing it with 5 instead of 3 golf balls or move the tees further away from the hole.

Good speed and a straight back straight through putting stroke are easier said than done, but with good rhythm, your consistency will improve drastically.

Open your hands up and place them on either side of the grip with your palms facing each other. Line up the grip so that your middle fingers are the only fingers that are in contact with the grip.

Initially, it will feel virtually impossible to putt the ball but your body and more specifically your shoulders will learn to generate enough speed to putt the ball. This drill kills two birds with one stone, it will improve both your shoulder turn and your rhythm which in return will lead to good consistent putts with good speed.

Do this drill as often as possible either at home on your carpet or the putting green and watch as your putting stroke transforms and subsequently your golf game as well.

Golf is “drive for show and putt for dough”. Amateurs are normally shocked when they realize this but nearly half the shots that you hit during a round are putts. The importance of putting can’t be stressed enough and improved putting can make a big difference to your golf game.

When it comes to putting the basics including alignment, setup and stroke are very important. Once the basics are in place a good stroke that is powered by your shoulders will ensure good performance on the greens.

If you are in the market for a new putter to go with your new and improved putting stroke read our Best Golf Putters article. 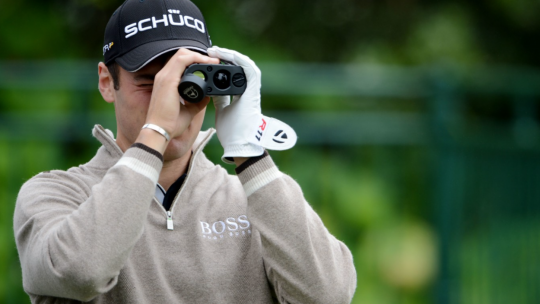 Rangefinder designs have come a long way over the last half a dozen years. Bushnell used to be head and shoulders above other rangefinder manufacturers but this has changed considerably in recent times. Bushnell still leads the way but thanks to... 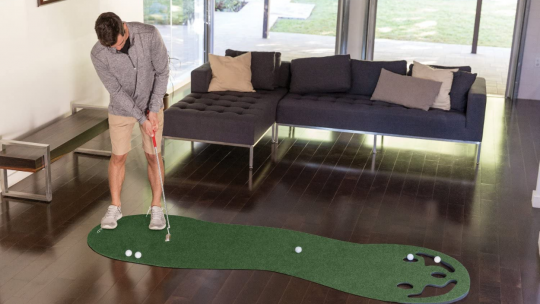 The 5 Best Indoor and Outdoor Golf Putting Greens of 2022

Golf putting greens and training mats vary in size and functionality. The market is flooded with a wide variety of putting practice greens and putting mats. With so many options available, choosing the right one can be tricky.  Table Of... 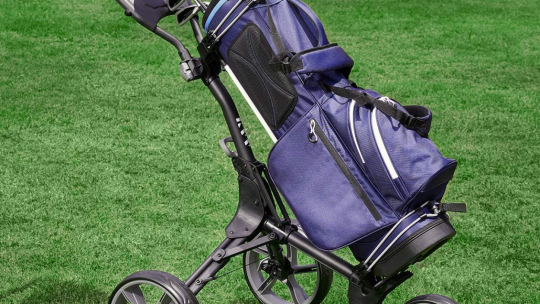 Golf push cart designs continue to evolve with every new model that hits the market. The popularity of push carts continues to increase and more and more golfers are opting for push carts. With a push cart, you still get a good workout when playing... 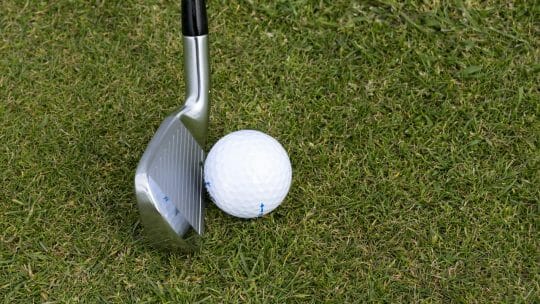 The 4 Most Popular Types of Golf Irons

Irons account for nearly half of the clubs that a golfer is allowed to carry in their bag. Standard golf sets feature 2, 3, 4, 5, 6, 7, 8 and 9 irons. Irons are available in different shapes and sizes and they are made out of different materials. In... 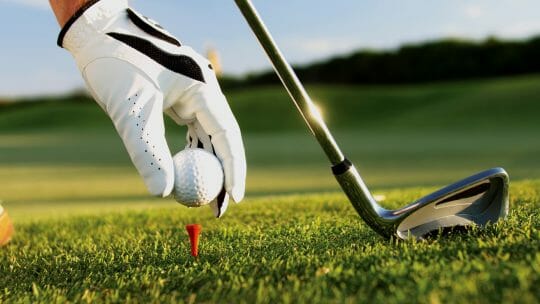 Golf gadgets come in different shapes and sizes, they also range drastically in terms of their price tag. From funky tees to rangefinders and selfie sticks, you name it or think about it and there is a golf gadget for it.  Some golf gadgets can... 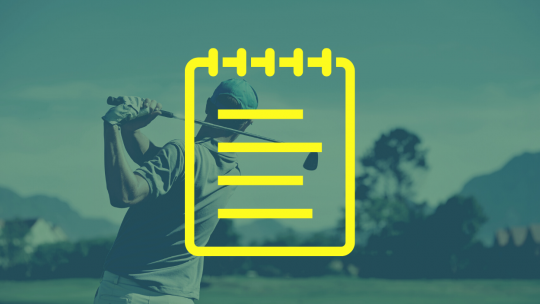 What Is A Golf Handicap? (And How to Calculate)

One of the first questions that golfers tend to ask each other is: “What is your handicap?” Non-golfers might hear this and feel offended, but handicap is a golf term and trust me as a beginner you will learn to appreciate the fact that you do have...